Navigation
Donate
© Global South Coalition For Dignified Menstruation - 2019. Site by: SoftNEP
Get connected to
Mark as Dignified Menstruation Day for ending GBV and Human Right
16 Days Activism
December 8
Mark as Dignified Menstruation Day for ending GBV and Human Right
Global Understanding on GBV:
Let us examine the meaning of GBV as defined by the Convention on the Elimination of all Forms of Discrimination against Women (CEDAW),“Violence that is directed against a woman because she is a woman or that affects women disproportionately.” More generally, GBV can be “any act of violence that results in, physical, sexual or psychological harm or suffering to women and girls, including threats of such acts, coercion or arbitrary deprivation of liberty, whether occurring in public or in private life”.  Additionally, it is globally recognized that GBV has no boundaries across nation borders, cultures, class, race, sexual orientation, or religion.  Thus, it is evident that GBV is the consequence of power and privilege and the unjust distribution of power in society.  Power is dynamic and there are many ways to construct/hold power, one of which ways is directly related to menstruation. Regardless of an individual’s identity, approximately half of the earth’s human population has/is going through menstruation.  However, while menstruation is a global truth, normal and biological, everywhere there is some form of taboo, stigma, or restriction during menstruation. All restrictions live on the spectrum and there are various forms of restrictions, some are visible while others are not, some are popular in the media and some are not, some are backed by religion, some with poverty and so on.
Menstrual Practice/Restriction constructs the Power 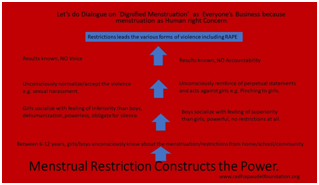 In Nepal, research conducted on menstruation shows that girls usually between the ages of 6-12, most pre-menses, become aware of menstruation through their mothers, relatives, and school and are taught that menstruation is an “impure” state of “impurity”, a state of “shame, humiliation” and a state of “powerlessness”. They are told this directly with words as well as see it visibly through watching their mothers, sisters, and menstruating individuals in their communities’ practice menstrual restrictions.In other hand, around the same age, boys are also taught or aware through their family, school and community that their absence of menstruation means state of “purity”, “power” and “superiority”. They see that the men in their lives and the community were not bound to any restrictions, or limited in any way, that they instead have the power to limit and restrict the ones who did menstruate. As they grow up, girls are then socialized for tolerance, acceptance and dociletendencies, and discouraged to question where boys are encouraged and awarded for questioning, challenging, and privileged to use violent words and actions under the guise of “boys will be boys”.  As children develop, they began to understand the power dynamic and become aware of the cause and effect of power and privilege but are indoctrinated through society gender norms and values and thus act on their conditioning. Girls continue to replicate their learned and internalized docile behaviours while boys continue to hold and display power, both playing into the roles of the victim and the perpetrator.

Menstrual Practice is underlying cause for GBV

Therefore, keeping GBV’s definition in mind, it is evidently clear that girls, women, individuals who menstruate regardless of caste, class, race, education, religion, nationality are subject to various forms of visible violence due to the invisible violence sustained by deep ignorance on menstruation, biases on menstruation as a “women’s issue” or a “private issue”, and global silence due to stigma and shame.Due to the stigma, shame, and taboo around menstruation, there are adverse immediate and long-term impact on one’s mental, physical, emotional, and socialhealth including all forms of gender- based violence, rape, murder, sexual assault, death, and more. Due to the dissentient value imposed on menstruation and menstruating individual, their inter and intra level of peace is destroyed. Their human rights (right to dignity, right to food, right to health, right to education, right to mobility) is significantly compromised at multiple layers throughout their life cycle. These rights are also globally recognized as constitutional rights in many nations like Nepal. More importantly, these rights are directly connected to one’s inalienable human rights which are global.
Linkage between Menstrual Practice/Restriction and GBV:
Here, there are various global studies which show evidence on GBV which are linked with the impact of menstruation discrimination. Likewise, international statistics show that globally girls and women suffer from GBV

Through analysis of statistical evidence, definition of GBV, and the impact of menstrual restrictions/practice, the intersectionality between GBV and menstruation are clear. We can only imagine how much suffering and GBV was constructed due to menstrual discrimination before we started talking about the Human Rights Declaration 1948 or Convention on the Elimination of All Forms of Discrimination Against Women 1979 or Declaration on the Elimination of Violence Against Women 1993 or Beijing Declaration and Platform for Action 1995 or Optional Protocol to the Convention on the Elimination of All Forms of Discrimination 1999 among girls and women globally because menstruation, as a natural, biological, and inevitable process since day 1 of the human existence.  In empirical analysis, it is evident that the  mortality and morbidity rates are increasing both in prevalence and incidence among girls and women due to childbirth, pregnancy, reproductive diseases, STI’s, HIV, and GBV violence; furthermore it is evident that the majority of these deaths are preventable but are delayed in diagnosis and treatment due to shame, stigma, and taboo. In order to mitigate and ultimately eliminate these disparities, it is essential that menstruation is a top priority and entry point for human rights and women’s health.
No One leaving Behind:
From the data above, it is indisputable that GBV is prevalent across the entire globe in various ranges and forms and is significantly impacted by menstrual restrictions/practices. Today, there are global efforts being made to achieve the 2030 Agenda for Sustainable Development 2015. In order to achieve these goals, “dignity during menstruation” or “dignified menstruation” must be highly prioritized due to having significant connection with many goals: Goal 1 -No Poverty, Goal 2-Zero Hunger, Goal 3-Good Health and Well-being, Goal 4- Quality Education, Goal 5-Gender Equality, Goal 6-Clean Water and Sanitation, Goal 8-Decent Work and Economic Growth directly and indirectly.
What is Dignified Menstruation:
Menstruation is a complex and multifaceted phenomenon of this universe and simple truth of human life.  It is not simply the average 5 days of bleeding or approximately 7 years of bleeding. It is also not only one’s reproductive years; it is the whole experience of human life.  Thus, `Dignified Menstruation’ is simply a holistic approach or comprehensive approach to encompass menstruation and mitigate discrimination against menstruation and the subsequent consequence. This framework applies from the womb to the tomb and is not only limited to “women” but to all individuals who menstruate, including transgender men as well as individuals who do not menstruate, thus the whole planet. Therefore, `Dignified Menstruation’ is everyone’s business. It is the way of perceiving menstruation as a human rights issue and holding all of us accountable to eliminate discrimination and assure dignity. Each individual deserve dignity during menstruation where there is no form of any discrimination, abuses, stigma, shame, restrictions or any form of harmful act during menstruation and inevitably outside of menstruating days too. Simply, it is a form of no differentiation between 25 days and 5 days in a month[2]. It is the concept beyond hygiene, menstrual products, and clean infrastructure where health, education, water, sanitation, human rights, empowerment and environment have to simultaneously intersect.For details:

Why Dignified Menstruation need to celebrate as a day of 16 days?
Simply, there is a critical need for global recognition and awareness of menstruation as a human rights concern. In order for governments and other organizations to prioritize menstruation, there is a need for global attention and celebration. Due to its direct relation to GBV and gender equity, it will be most impactful to end all forms of GBV as well as promote human rights.
Why December 8:
Each day from Nov 25 to December 10 is precious and important but December 8 falls on the international human rights month.
Isn’t it Overlapped with May 28, International Menstrual Day:
By considering the essence of menstruation, every day is menstrual day. To go beyond the hygiene and infrastructure and see it through an overarching human rights perspective, there is a need for a special day of celebration.
Slogan for 2019:
Dignified Menstruation for ending GBV and ensuring inalienable Human Right.
Radha Paudel Foundation:
This national non-profit organization instituted by the young people in order to replicate the approach and philosophy of Author and Activist, Radha Paudel. We stand for the dignity of the individuals who are marginalized, oppressed and discriminated.For details: www.radhapaudelfoundation.org
Appeal to Mark December 8
Here in Nepal, Radha Paudel Foundation and its partners will be marking
December 8 as Day for Dignified Menstruation.
At lgobal level, the friends and partners of Global South Coalition for Dignified Menstruation will mark at various country across globe.

Therefore, Radha Paudel Foundation will urge each of you to mark this day and encourage to save your daughters, granddaughters and entire planet for the sake of human right.
Social Media:
Please follow the social media of ours and use as much as possible from your side with followings tags:
#December8DignifiedMenstrualDay
#DignifiedMenstruation
#16daysVAW2019
#December82019